Hey guys. So. If you follow me on Instagram, you’re familiar with this story. If not, well, here you go.

A couple of weeks ago, some coworkers (including my boss) shamed me for the candy I eat. Publicly shamed me. My boss even said, “You’ll thank me in a couple of months when you’re on the beach.” Um, I was fine with this body being on the beach. Some different coworkers were upset on my behalf and cheered me up. So I decided to bake my way through my cookbooks for them. I’ll eat the cake until it runs  out, then no sweets until the next weekend. 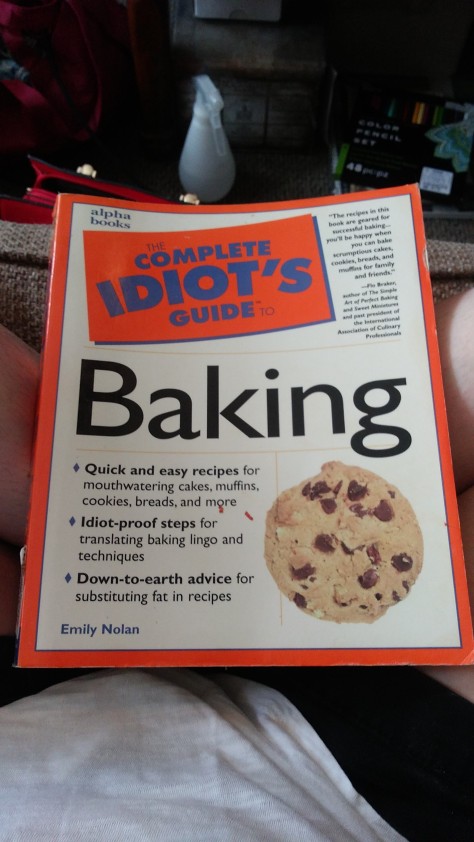 (I’m not going to give you the recipe. That would be stealing from the author. Buy the book or check it out from the library.)

The first section is cake! I love cake. Who doesn’t?

Carrot Cake was the first cake I made for them. I even grated the carrots myself!

It wasn’t until Richie was showing me how to grate carrots that I realized I could have bought a bag of shredded carrots. Ah, well. This makes it more authentic. (so I tell myself.)

Everything was going along swimmingly UNTIL: 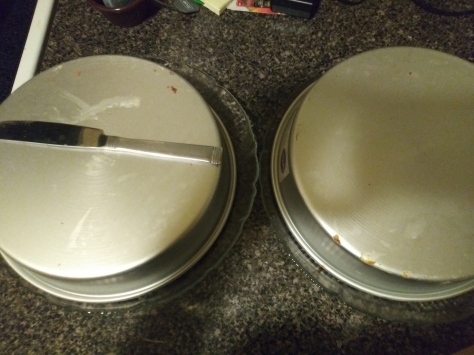 Did I grease the pans? YES.

Did I flour the pans? NO.

And apparently, that’s where I went wrong.

Bad: Not if you announce those sins to the world.

Good: I ate the sins and shared the rest!

Hideous but delicious. A metaphor for my life.

And I ate the rest! 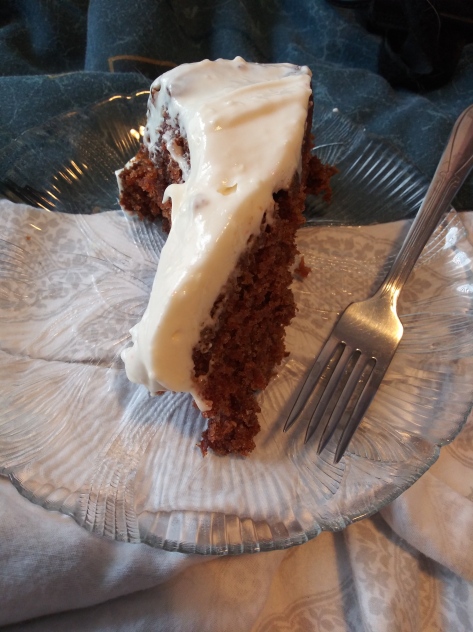 I know it’s been a while, and I want to change that. I’ve been behind in quite a few things this year-a bit of mild depression. But I’m going to do my best to blog more. For anyone who hasn’t left, I hope I haven’t left you all hanging too much,

Hey guys. I know it’s been a while since we’ve spoken, but I’ve been thinking the past few days about this blog, and I think  I know why that is.

All the to-do lists and challenges that I set for myself kind of take the fun out of blogging. There’s just all kinds of pressures for me to finish, and to carve time out of my day to write when I don’t always have the time or energy or desire. Sometimes I even feel like a failure if I don’t complete everything. (I finished all but one of the Spring Bucket List.)

I do miss blogging, and I want to come back to it, but I need to ease up on my rules, and to just blog lazily like I did in the beginning. I want to go back to showcasing my baking and knitting and whatever else I do, and just not always feel pressure that I DO realize is self-imposed.

Overall, things are fine at the moment. I’m on vacation next week. Work is infinitely better than it was the last time I went on vacation. I even received a raise!

I still want to work through all my cookbooks, but even baking every weekend it won’t be completed in a single year. I am going to try baking more often, because I miss it.

So, if you’re still around and still reading, I do hope to be more active, and soon.

Ah Memorial Day weekend. The first weekend of the year to barbecue. And this year, Mom outdid herself and we stuffed ourselves silly. 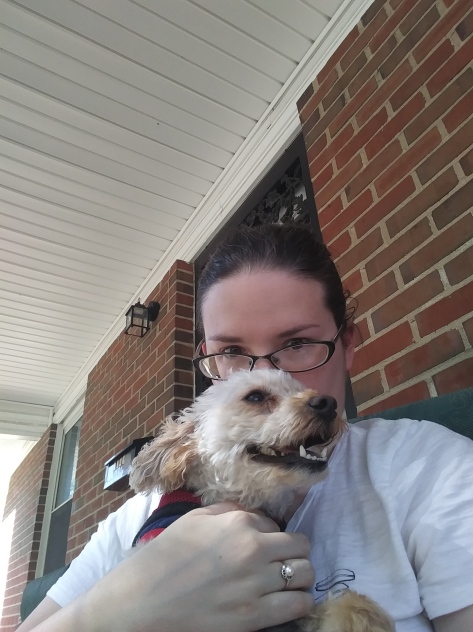 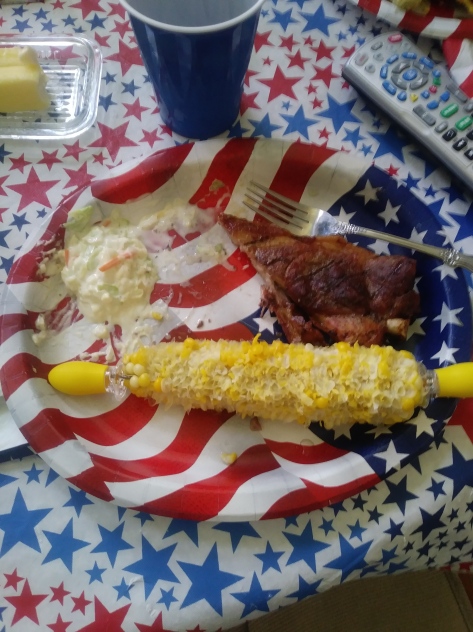 Also, I tried banana pudding for the first time: 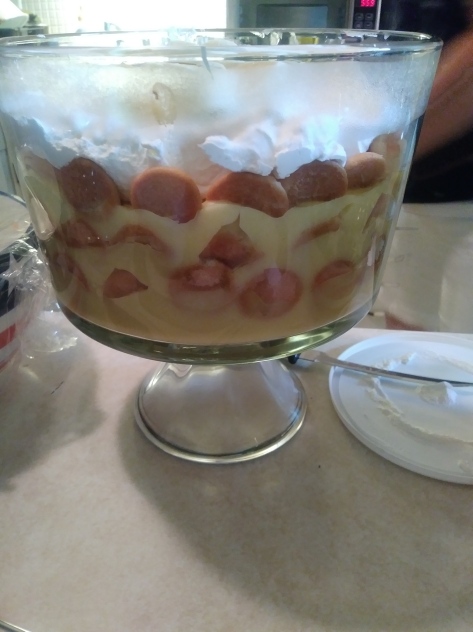 This shit is dangerous as hell

And tasty as hell.

This adventure found me at Lafayette Park on a glorious day:

Amazingly enough, it did not rain. Just dark and not crowded, which was great.

When I first arrived, all of the water fowl were on the opposite side of the little pond/lake/body of water. But I started chucking small pieces of bread in, and that got their attention. 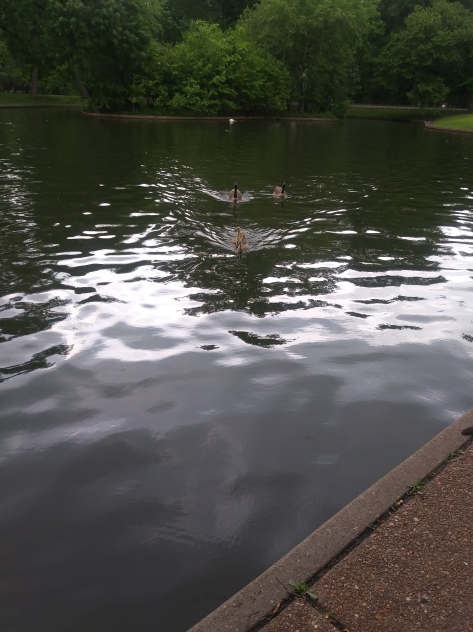 Luckily for me, I’ve already knocked out 7 items on my list.

I’ve just been too lazy to write.

Get ready for the onslaught.

The park. Benton Park. Of all the times I’ve passed by going to Shameless Grounds or Indigo Wellness, I never actually stopped by. 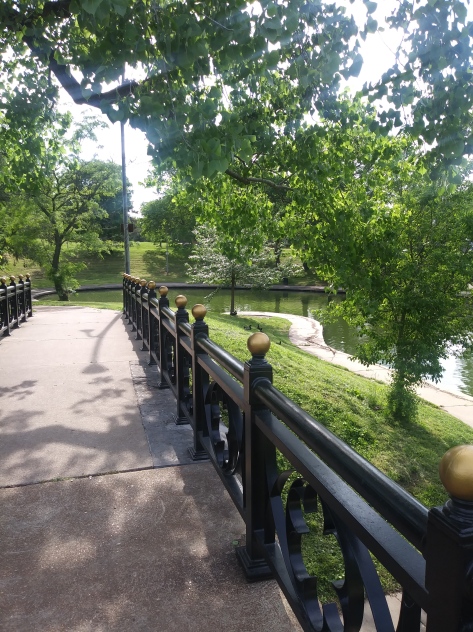 And there were so many good dogs. I made quite a few friends, and one new boyfriend. I should have taken some photos of the puppies, but some people are weird about that sort of thing. Oh well.

Been a while, eh?

I’m looking to change that.

So! Spring Bucket List. I was thinking from now until June 1st.

Then I look at today’s date.

So I rethought my deadline date and it is now June 20th, as the Summer Solstice is June 21st. That’s when we’ll do the Summer Bucket List.

I’m excited! Are you? I’m visiting the library because I still haven’t been since the renovation. And on almost every list I saw was “bake cupcakes”. I’m sure I can find a springy recipe.

Remember back in October when I got promoted and I was so super stoked about it?

Yeah, that joy has been destroyed now.

I am the backup for my team, so I have been learning a bunch of different things. I had thought things were going swimmingly (because NO ONE had told me different) only to be pulled aside by my boss last Friday (23rd) to be told that I am failing. Hard.

Did I mention she did this right before my vacation? As in, we leave the office at 4:30 and she pulled me aside at 4:05.

Apparently, if I was more self- aware, I would have seen this coming (according to her). She had a stack of errors. (Five months in, this is the first I’m hearing of any of them) She had to mention the other new girl who started a week after me had her job down pat after only a month on the job. She asked if I liked my job (as if I’m self-sabotaging or something? Like I’m intentionally not doing a good job because I hate it here?) and if I got overwhelmed. Yes, I get overwhelmed. This is not work I’ve ever done before! And she knows this! She knew this when she hired me! And no, she doesn’t check on me. I guess at the skill/salary level we’re at she doesn’t think she should have to. And maybe she’s right. I barely speak to her. This is not an exaggeration- there are days when the only thing I will say to her will be “Good morning.” Apparently, even though no one has told me different, I should still know that I’m fucking up. Also, if I ask two different people the same question, they will get offended as if I doubt their world. That’s what it is. Not me double-checking and clarifying and the first person isn’t available so I ask the second person. She says we’re a cohesive team. No we are not. You guys are cliquey mean girls in a high school movie. I can hear you all gossping and giggling.

I guess I was spoiled by my previous boss. She had monthly meetings with everyone on her team. She would let us know what we were doing well at, what we were doing poorly at, and what she wanted us to focus on. I always knew where I stood.

I guess I do now. I’m massively fucking up. At everything.

I go back to work tomorrow. I dread it. I’m going to go in there and work harder and do my damndest (even though I already thought I was) but now I worry that I’m not good enough. And even if I am able to improve and do really well in my actual evaluation, this will never be a distant memory.

This was cruel. Who pulls a person aside a half hour before they go on vacation to drop this kind of bomb? Why wait so long to let a person know they aren’t doing well? Why not help them right when you spot a mistake? I don’t feel as if I can trust my boss after this.

But the worst thing of all, was that she made me doubt myself. She made me feel like I was too stupid to do my job (and I hate using that word because it’s ableist), like I should have just stayed where I was and never tried to aim higher, that I don’t belong in this position because I’m just not good enough. I was a wreck when I got home that night. I was incredibly sick. Stress about getting fired, worry about the future, heartbreak that I wasn’t doing as well at a job I genuinely like as I thought I was.

I don’t think I’ll ever forgive her for that.

Now, for the first time in five months, I dread going into work. 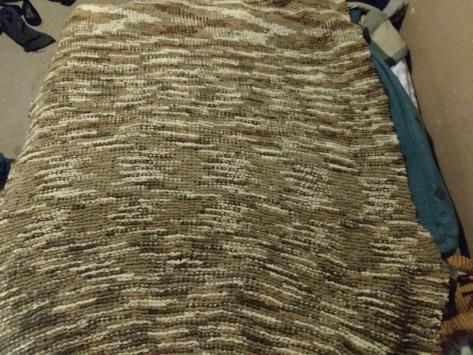 After two years. Maybe longer, since it started off as a checkerboard pattern before I frogged it and just did straight garter stitch.

Also, this is not something you knit during warm weather. 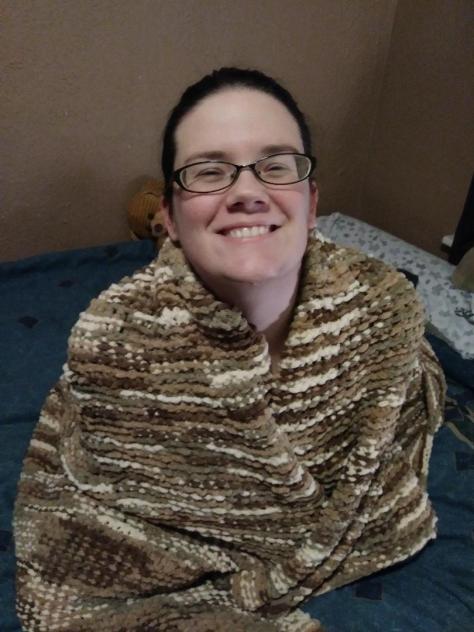 And then Richie decided it was his and took off running with it. 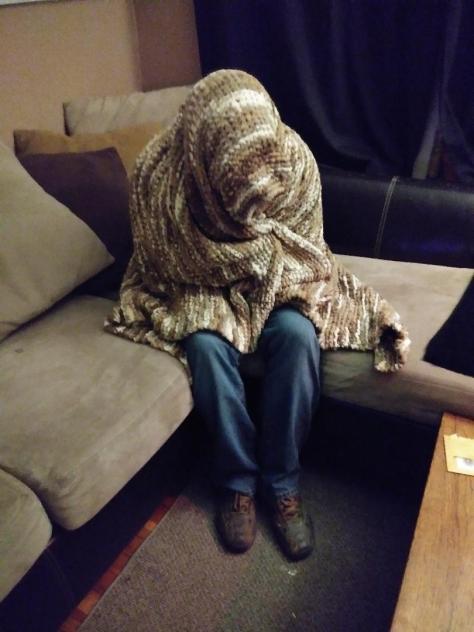 Um, excuse me. That’s not yours.

When it comes to goals, I have a couple:

I spent my NYE the same as I did last year– cleaning and organizing. There were a few  differences: I didn’t return my library book; Richie was home and Zach our landlord came over; Richie and I bought a new bookcase at IKEA and put it together (we pretty much have a library now); at midnight I was playing cards with Zach and dancing like the geek I am. Hopefully that means I will be more active throughout 2018.